This report was written by Linda Coyne, Cindy Kuhlman and Nicole Zovak from SKC Inc. The original title of this report is: The Stability of Sulfur Compounds, Low Molecular Weight Gases, and VOCs in Five Air Sample Bag Materials. Samplebags.eu does not take credit for this report.

Sampling bags have been used for many years to collect grab samples of gas and vapor contaminants in the air. Originally developed for the industrial hygiene market, sampling bags have also gained popularity in environmental applications including the following:  (1) investigating odor complaints at factories, refineries, and wastewater treatment plants, (2) sampling high vapor pressure materials where solid sorbents are unsuitable, (3) sampling in landfills, and (4) transporting and preparing calibration standards for direct-reading instruments and gas chromatographs.

In March 2009, DuPont® announced its plan to “phase out support” for Tedlar® film in the sample bag market. The elimination of Tedlar film, a mainstay in the industrial hygiene and environmental markets for many years, served as a catalyst for the study and adoption of other films as alternatives to Tedlar for bag sampling.  In 2012, DuPont announced that due to market conditions, Tedlar film would again be available for the sample bag market. Therefore, this report includes data on Tedlar as well as on the performance of four other films. Each type of film features a unique blend of characteristics including background levels and the ability to contain certain groups of compounds. Film characteristics must be taken into account when selecting a sampling bag film for a specific application. To that end, studies were performed on different bag films to determine their suitability for different groups of compounds.

In this report they have evaluated SamplePro® FlexFilm (proprietary material), SamplePro PVDF (our Kynar® PVDF bags) FlexFoil®  PLUS (our Foil bags), FluoroFilm FEP, and Tedlar (our Tedlar bags) for effectiveness in holding 32 volatile organic compounds (VOCs). The VOCs covered a wide classification of chemicals including aromatic and aliphatic hydrocarbons, chlorinated hydrocarbons, ketones, acetates, and alcohols. Some of the films were also evaluated for 2-day stability in holding 20 sulfur compounds, and low-molecular weight compounds such as ammonia, carbon monoxide (CO), carbon dioxide (CO2), methane, sulfur hexafluoride (SF6), and sulfur dioxide.

Throughout the study, tests were conducted using 1-liter bags of each type of film fitted with a single polypropylene fitting. VOCs were tested by injecting known volumes of the test analyte into the bag filled with nitrogen. Concentrations ranged from 200 to 300 ppm, depending on the analytes. Bags were equilibrated for 20 to 30 minutes. Analysis was performed on day 0, day 1, and day 2 by extracting 100 µl of a gas sample from the bag and injecting it directly into a gas chromatograph (GC) equipped with a flame ionization detector (FID).

Sulfur compounds were tested at Air Toxics Inc. by using a certified cylinder containing 20 sulfur compounds in nitrogen. The test level of each compound was at the lower level of 90 ppb since this is primarily an environmental application. Bags were equilibrated for approximately 2 hours. Analysis was performed on day 1 and day 2. Samples were analyzed by ASTM Standard Test Method D-5504 using a gas chromatograph equipped with sulfur chemiluminescence detector (SCD). The method involved the direct injection of the air sample into the GC via a fixed 2.0-ml sampling loop.

Ammonia, carbon dioxide, carbon monoxide, methane, sulfur hexafluoride (SF6), and sulfur dioxide were tested using certified Scotty 17 cylinders. The cylinder levels were 50 ppm, 50 ppm, 1000 ppm, 5000 ppm, 1 ppm, and 20 ppm for these compounds, respectively. Bags were filled with the individual test gases and allowed to equilibrate for 20 to 30 minutes. Analysis was conducted on day 0, day 1, and day 2. Ammonia, carbon dioxide, carbon monoxide, and sulfur dioxide were analyzed using Dräger® color detector tubes. Methane was analyzed by extracting 100 µL of a gas sample from the bag and injecting it into a gas chromatograph equipped with a flame ionization detector. Sulfur hexafluoride was analyzed using GC with electron capture detector (ECD). 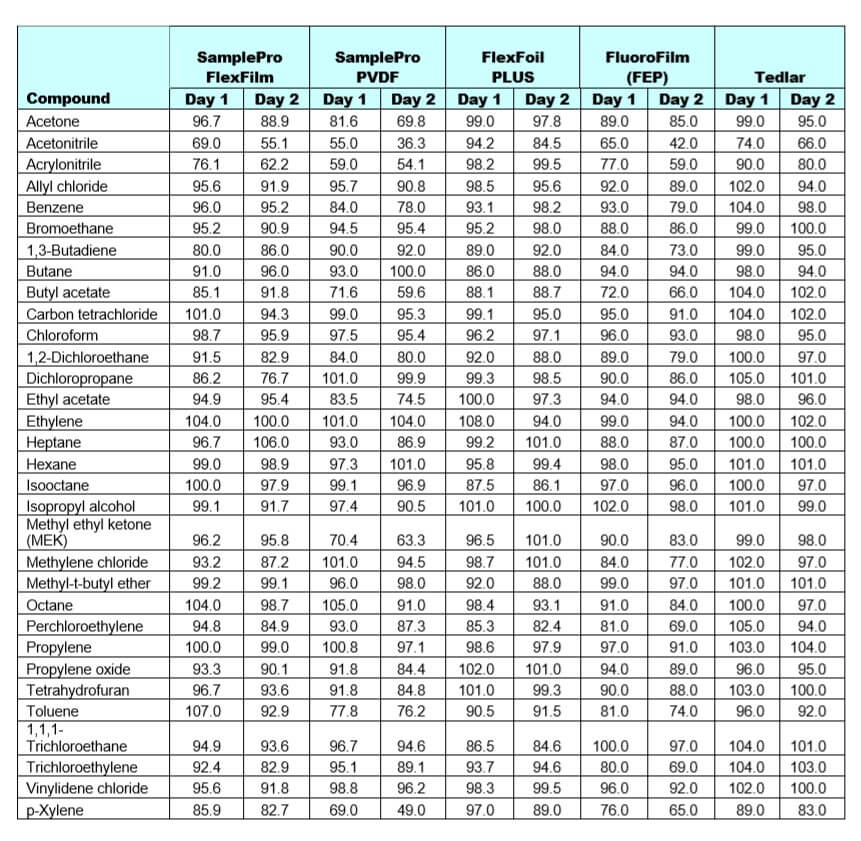 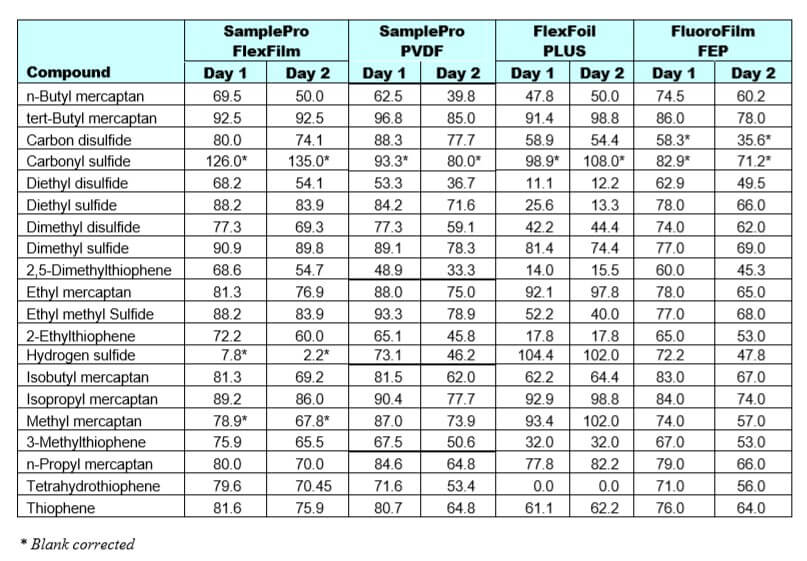 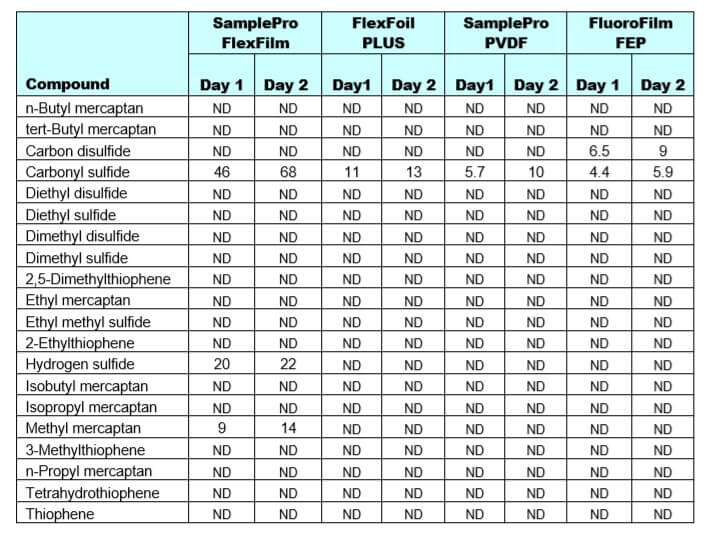